The next day was purely organizational. We had to unpack and go shopping because there was only echo in the fridge. The next few days were spent getting ready for school. This year, our youngest son started his school education. In a word, from this year “free house”😜, although for those few hours, because the youngest for the first two weeks had only 3 hours, and then 4.5 hours of classes. School was a 5-minute walk away, so I saved a lot of time. Off course this time was not reserved exclusively for me, because it was necessary to go shopping or cook dinner, but at least alone and fast. Sometimes I even found some time for myself, to meet with friends for coffee, or just to be alone with myself. 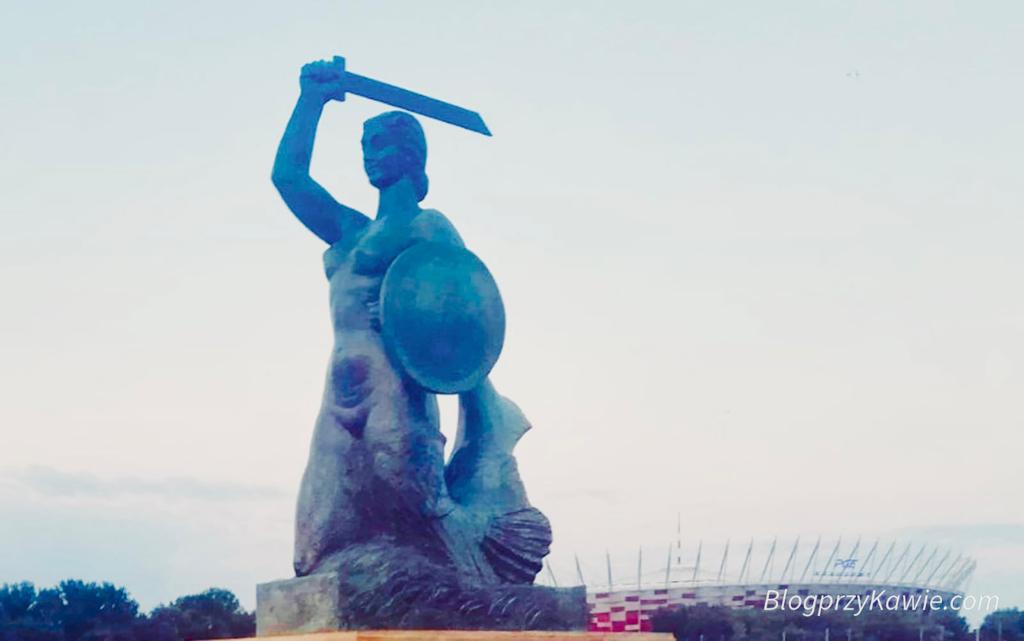 Warsaw Mermaid on the background of the National Stadium

Before returning to my after holidays duties, I managed to fly to Poland for a week. Well, not for the sake of relaxation, because, as usual, something needs to be done, but I was able to calm down a bit. The day before coming back to Dublin, I had a great time with my friends celebrating my overdue birthday together with Isia’s birthday 🎂🍻, which I mentioned in the first post. I needed a rebound. The next day I had a flight, and wanting to make the most of the time, I bought a ticket for 10:00 pm, and still had the whole day to go around Warsaw 😉. I was in Dublin at midnight. About 1:00 am I went to bed, and already around 7:00 am had to get up and take the children to the Polish school. But this did not frighten me at all, because at the very thought of the fact that the children are at school, and my husband and I can spend some time together, go for coffee and cake ☕️🧁, for a walk, etc. I didn’t feel tired 😉.

It’s September. My husband received an e-mail from his former boss, asking if he would like to return to Poland. I’ll be honest, we weren’t thinking about going back at that time, but the offer gave us something to think about. It was not yet certain, because only he himself conducted conversations about his position in a hotel in Warsaw. His acceptance of this job offer would bring us closer to returning to the country. It was a little hard for us to imagine life there after all these years, but if necessary, a person would adapt, I think. A week later, my mom came to visit us, and during that time, the idea was born that she should come and stay for a bit longer. Two weeks later, she was back with us. I was supposed to go to work at the time, and until I get everything organized, she would take care of the kids. But it turned out differently. I took a computer course. Better than nothing. You have to start somewhere. For me, it was my running out of the house for a few hours 😉.

At the same time, our eldest son urged us to have a dog. I, of course, absolutely disagreed, because I know what that means. It didn’t work out with the dog, so he switched to the cat. His requests were argued by the fact that his colleague had just small kittens, so he can already bring one home before they are distributed. The cat absolutely passed out, too. I had mine, and thank you for more. Besides, the neighbor had a cat, so it was enough 😉. She let them come to pet her, obviously only if she allowed it, because she did not like to be fondled by strangers 😁. But it only helped for a while. They began to cry, started their promises and in general everything that was possible at that time to get a pet. Mom, means me, I was adamant. Something would have to happen to my brain to have a dog or a cat with four children. And you know what? You won’t believe it, because it’s hard to believe. I still can not understand it myself, but something happened to my brain, and even more. Something must have hit me hard in the head 🤕, which I do not remember, because not only that I suggested to my husband that maybe we will take the dog, you will not believe which breed 😳. My argument was that when we return to Poland, we will build a house and the dog will guard it, and besides, he will have plenty of space to run around the garden. Do you have any idea what kind of breed it is? … Congratulations to those who guessed 🎊. I am annoucing right now. Thinking about a dog, we have always been accompanied by one breed, but looking at the photos, some other crossed our minds. In the end, we chose the one that my husband and I had always wanted. It is a German Shephard 🐕. You tell me … there’s something wrong with my head. You don’t want to know what other breeds I was taking in consideration, because you’d break down by now. Let me just tell you that this was the smallest of the chosen 😜. 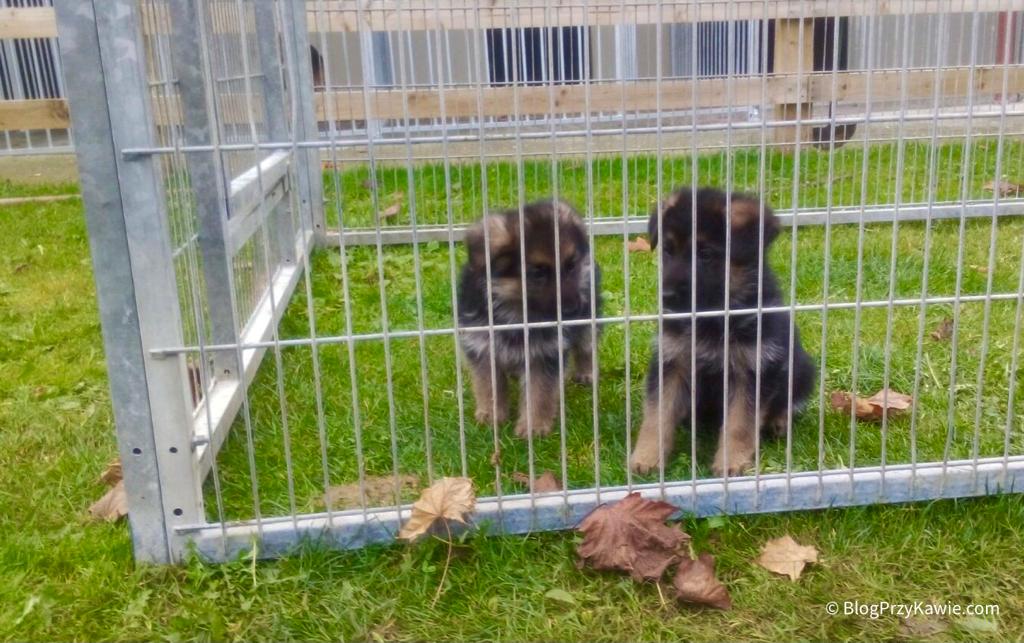 Choosing between the two

A memorable day, October 29th. It was Saturday, so the children were in a Polish school, and we went to pick a dog. We had two in our sights right away. My mother and I liked it lighter and more fluffy and my husband darker with less hair. The choice between the two was very difficult. They’re both wonderful, lovely, and you just want to keep hugging them. But the problem solved itself. We couldn’t decide, the dog decided for us. He went up to my husband and lay down on his shoes. We knew right away that he was ours 🥰. We had to wait two more weeks to take him home, because he was only a month old. Until then, our lives went on without major changes, and the name for the dog we chose through play, so that the children did not suspect anything. As a last resort, we chose the name Kodi. 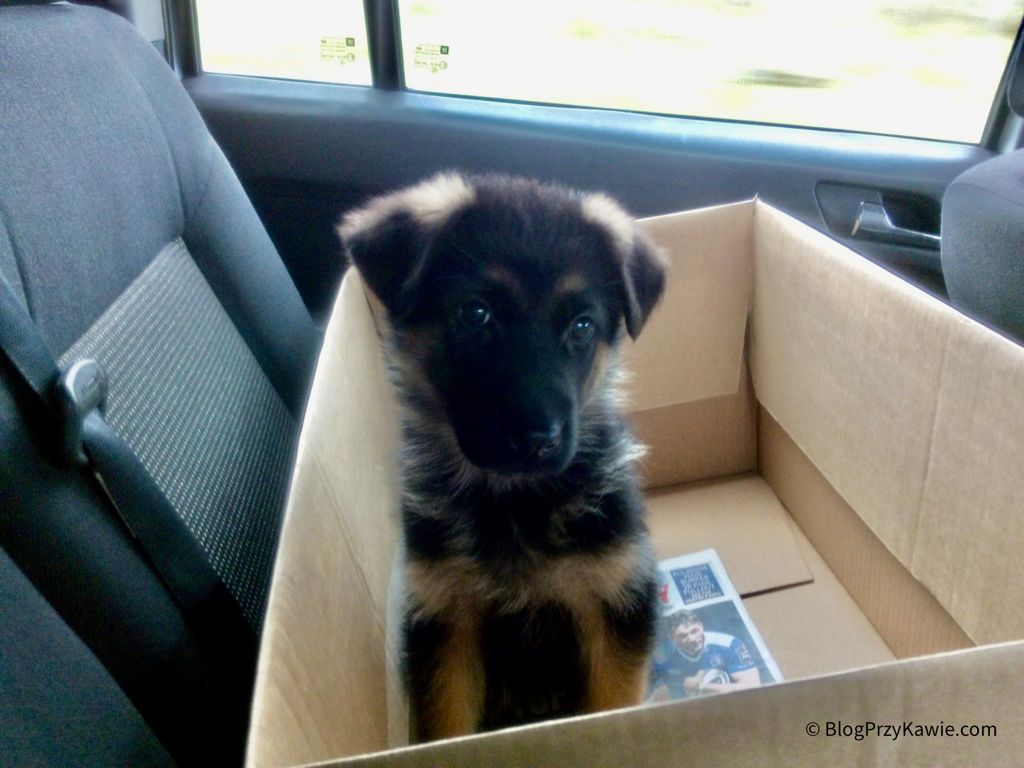 On the way to a new home

It was almost time to pick up our new family member. At the same time, on the horizon appeared a position in the hotel in Bahrain, where my husband’s former boss worked. And what to do now, apply or not? We were still waiting for what would happen to this job in Warsaw. It took a long time. The former boss said to apply, and if he does not accept a job in Warsaw, he will take my husband to Bahrain. And so he did, he applied. 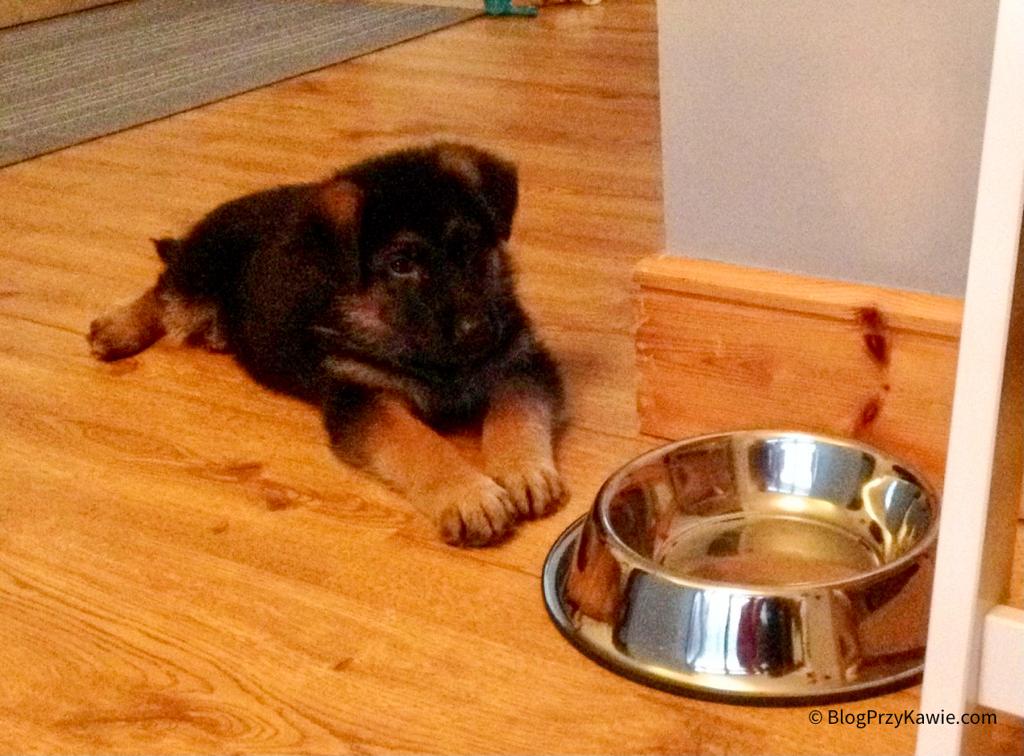 The day we brought the dog home, there was no end to the joy. When the kids came home from school, they saw a box in the middle of the living room. When they tried to open it, the box moved. A little frightened, and at the same time even more interested in what is inside, they approached with caution. Suddenly, the box turned over and a small, black ball popped out of it. There was a nice atmosphere in the house. The kids were overjoyed to have a new pet, and we were excited about what was going on in professional matters. 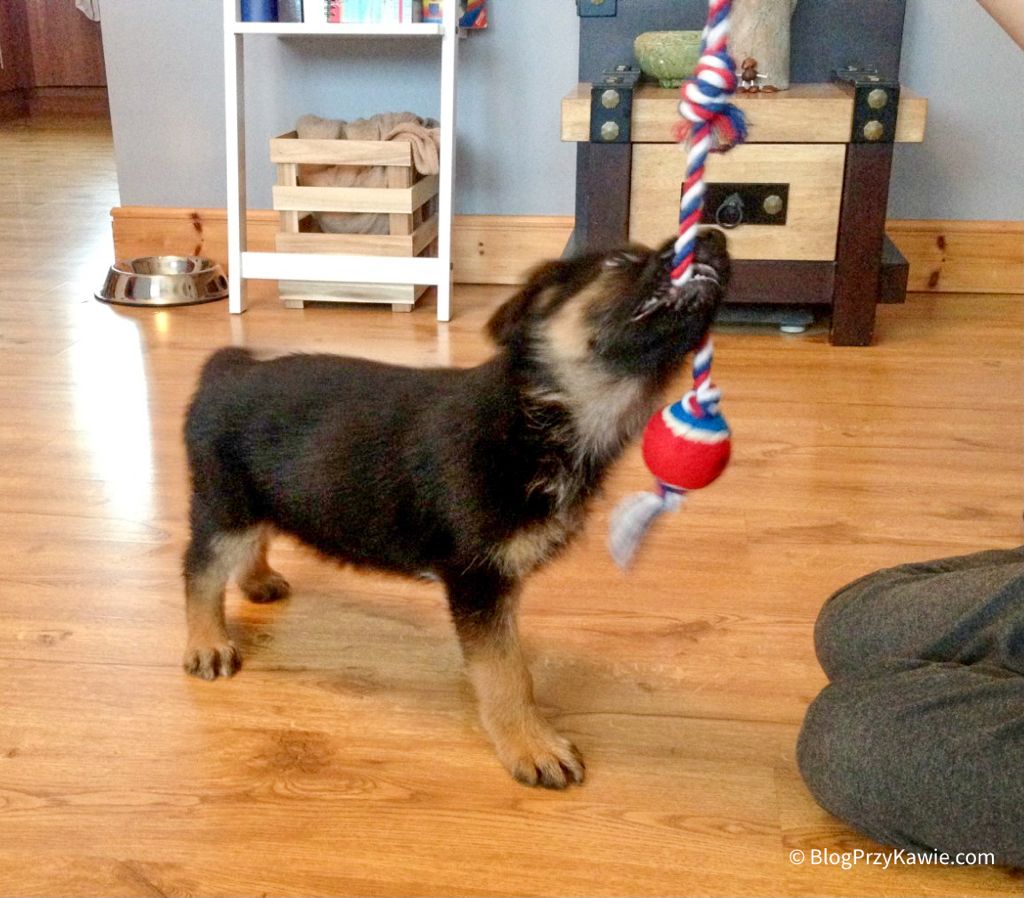 November was a very intense month. I went to the course, and my husband on his days off was talking and exchanging emails with Bahrain. It lasted until Christmas. We still didn’t know what to do with Warsaw. During the holidays, all conversations were suspended and we had to wait until January. We talked a lot about going to Bahrain, because I never wanted to live in the Middle East. Not my cup of tea. In difficult moments we always go for a walk and talk or dream, depending on the need 😁. I love our walks. 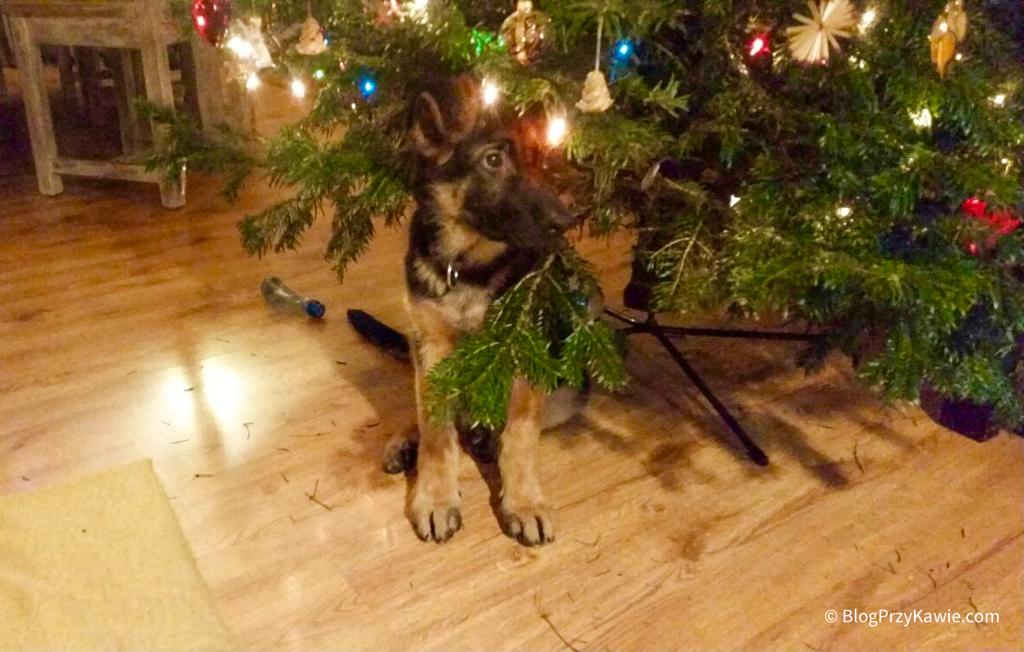 Christmas this year was enriched with a grandmother and a dog. By default, my brother was also with us. We were a little worried about the Christmas tree, if by chance it will not become a toy for the dog, but our fears were unnecessary. I wish such a dog to everyone. Calm, polite, very intelligent and beautiful on top 😁. What more would you want? Yes it just would seem that nothing, and yet. I will mention this later 😞, and now we are ending 2016 and entering 2017. We spent New Year’s Eve at home. We invited our new neighbours, and after the kids and grandma went to bed, we started celebrating. I consider the event to be a success 😜, and whether this will apply to the next year, you will see in the next parts. 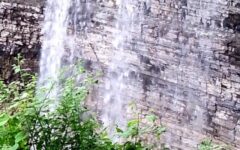 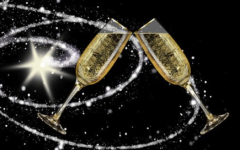 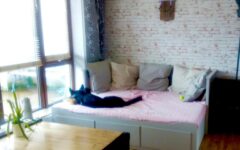